In an effort to deliver swiftwater and technical rescue throughout the Southeastern United States, we are pleased to announce the offering of the Rescue 3 International Swiftwater & Flood Rescue Technician Unit I (SFRT I) course to any fire & rescue, law enforcement, military, industrial or recreational provider.
The Rescue 3 International SFRT I course addresses various aspects of swiftwater and flood emergencies with a focus upon rescuer safety and team efficiency during these types of emergencies. This course is a physically intensive, 30-hour class that includes classroom instruction followed by two days of developing and practicing water survival & rescue skill sets..

Emphasis of this course is based upon self-rescue skills and meets and/or exceeds the skills taught within N.F.P.A. 1006 Awareness and Operations for swiftwater rescue. Other topics include an in-depth analysis of hydrology, handling hazards and obstacles, rescue equipment familiarization, utilizing basic rope systems, conducting in-water contact rescues, and much more. Information from this course is applicable to anyone confronted with potential water rescue, as well as, the possibility of self-rescue.

This is a physically and mentally challenging course! Those students with phobias of swimming class I & II rapids, extremely cold water (35 degrees), or extensive health problems (heart, trauma, respiratory…) are discouraged from attending this course!

The SRT I course is an objective driven course, class times will be promptly adhered and will dismiss when all objectives for each training date have been completed.Attendance to all class sessions is required in order to receive full certification.Students will receive a course manual, skill sheet, test, certificate of completion, I.D. card, and patch during the class.

The Rescue 3 Int. SRT I is the first of three classes needed for personnel to meet the requirements for the Technician / Level II NFPA 1670 Standard on Operations and Training for Technical Rescue Incidents and the NFPA 1006 Standard for Rescue Technician Professional Qualifications in the area of water rescue.  Our SRT courses are delivered in two regions of North Carolina, Nantahala River (Bryson City, NC) and the Roanoke River (Weldon, NC).

Students are responsible for their own Personal Protective Equipment:

Rescue North Carolina reserves the right to refuse any equipment not compliant with industry safety standards or not meeting safety inspection guidelines.

Lecture location is subject to change based on availability and lodging demands.

River training will meet in the parking lot of the River Falls Park located at 50 Rockfish Dr. in Weldon, NC

About the Roanoke Canal… The Roanoke River, by far is the largest river in terms of water flow in North Carolina, it was for centuries a path of commerce and travel, first by American Indians and later by European settlers. In 1812 North Carolina lawmakers directed the subscription of shares in the new Roanoke Navigation Company, formed to build commercial navigation on the Roanoke and its tributaries. Although the company was chartered in 1812 by the state legislature, the cooperation of Virginia would be needed to secure the benefits of a commercial waterway reaching deeply into the interior. In December 1815 Col. William Lewis traveled in a flat bottom boat from Greenhill, Va., on the Staunton River, to Norfolk. His successful journey convinced the Virginia General Assembly of the practicality of commercial navigation on the Roanoke River system, and a charter was approved. Later, Virginia investors gained control through stock acquisitions. Almost all of the stockholders were businessmen with interests nearby or upriver.

The Roanoke River system consisted of three major components: the lower 100-mile portion of the Roanoke River between Weldon and the Albemarle Sound; a nine-mile network of locks, basins, and a canal at the falls at Weldon; and the upper 300-mile stretch of rivers that reached to the foot of the Blue Ridge Mountains. The canal itself was to be about 15 feet deep and 40 feet wide, with a 10-foot-wide towpath alongside it.

By 1828 the lower Roanoke was improved to allow navigation by steam-powered vessels, and the steamer Petersburg was placed in service carrying cargo from Weldon to Norfolk.

For over a decade, the Roanoke Canal prospered, transporting vessels powered by tow animals, sail, and steam.

When the Petersburg Railroad in Virginia reached the Roanoke just across from Weldon in 1833, the “iron horse,” free from rivers and almost never halted as canals were, cast the die against the Roanoke Navigation Company and similar operations. As other rail lines were built, the canal’s revenues plummeted, and the Roanoke Navigation Company produced its last detailed annual report in 1855. As traffic disappeared, the property fell into disrepair. In 1875 the North Carolina General Assembly ordered that Roanoke Navigation be dissolved and its property sold. The canal would never again play a role in transportation. The company was one of only three such public improvement companies in North Carolina that ever returned money to its investors, paying over its lifetime 57.25 percent of stock prices in dividends. 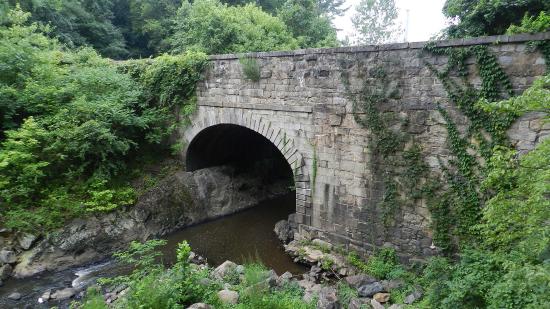 In 1885 several wealthy businessmen, many from Petersburg, Va., purchased the Roanoke Canal property for $19,525. The new company, the Roanoke Navigation and Water Power Company, sought manufacturing, milling, and foundry operations to use the canal’s water. After some success, company directors announced in 1890 a much more notable goal: using the canal to generate electricity. By 1892 generators were in place at both Weldon and the middle locks, and the Roanoke Canal was supplying the first electric power to Weldon and its environs. Weldon soon boasted new cottonseed, corn, and peanut mills, cotton yarn and fabric mills, and a large winery and bottling plant. As a result of Roanoke Canal electricity, the hamlets of Rosemary and Roanoke Junction developed, near the middle locks, into present-day Roanoke Rapids.

Physical evidence of the Roanoke Canal remains, largely because of the work of preservationists. Weldon, laid out in 1820, is the only surviving municipality created primarily by the canal’s construction. The beautiful, impressive stone aqueduct in Weldon that carried the canal over Chockoyotte Creek has been preserved, as have the walls of the combined locks in Roanoke Rapids.

All meals are at the responsibility of the student.

Day #1:
Supper is at the conclusion of  lecture around 7 pm.

Day #3:
Breakfast -On Your Own;
Lunch- Bring bag Lunch;